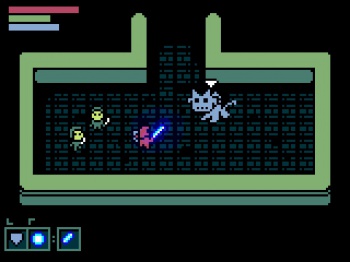 Jasper Byrne's next game will combine Legend of Zelda with Demon's Souls.

When we look back on the indie games of 2012, one title that will inevitably come up is Lone Survivor, a 2D side-scroller that dealt with survival horror in the post-apocalypse. Created entirely by developer Jasper Byrne, the game gained popular exposure thanks to a last minute addition to the Humble Indie Bundle, and even scooped up a nomination for the Golden Joystick Awards "Best Downloadable" category. Byrne isn't about to rest on his laurels though, and has recently announced that he is hard at work on his next game: a dungeon crawler combining elements from Zelda and Demon's Souls.

"Basically it's a combination of all the ideas I've been shooting around since the later parts of making Lone Survivor," Byrne explained, "from dungeon crawler to sci-fi head-messing to whimsical platformer... or another way of looking at it may be Zelda x Demon's Souls?"

Byrne's unnamed game is still very much in the early stages and will likely go through significant changes, but is fleshed out enough to provide some early screenshots and gameplay descriptions. "It has two-handed combat, equipable weapons and rolling (I love rolling)," Byrne continues. "I'm now writing an engine to make this sort of Zelda-Phantom Hourglass type projection to try and make the environment more exciting, but unlike that game it will use sprites to convey the characters. I still have a good way to go before I can get this sort of look in-game, a lot of tools to write and art to draw."

The screenshots themselves feature a variety of gameplay perspectives, including top-down world views reminiscent of the original NES Zelda games and 3D dungeon crawling elements. Since Byrne is writing a new engine, it's difficult to say how much of what we see now will be preserved in the final release. Still, I expect the premise of combining Zelda with Demon's Souls alone would be enough to get the attention of most gamers, and following up a successful indie hit is simply the icing on the cake.

Nintendo Switch is a Gimmick That Works Encaen 5 Comments