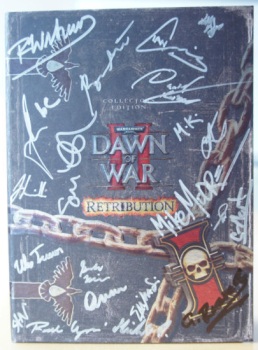 The Company of Heroes and Space Marine studio is auctioning some rare loot to raise money to help fight cancer.

Taking place on October 13, Road Hockey to Conquer Cancer is a one-day, dawn-to-dusk road hockey tournament that raises funds for the Canadian Cancer Society. And we're not talking just a few hundred bucks here, either; the minimum entry fee is $10,000 per team, and more than 100 teams are currently slated to take part. Among them is a squad from Vancouver-based Relic Entertainment, the studio behind Homeworld, numerous Warhammer 40,000 games and the Company of Heroes franchise, and it's giving fans a chance to support the cause and score some sweet loot in the process.

"We're closing in on our goal, but we still need a bit more money - so we're holding an auction for some signed swag," Relic designer Ryan McGechaen told Joystiq. "We have a ton of cool stuff, including an unopened copy of Homeworld 2 signed by the dev team!"

Also on the loot list are autographed Dawn of War and Space Marine posters, an autographed Space Marine Collector's Edition for the Xbox 360 and a framed Company of Heroes PC Gamer post. It's one-of-a-kind stuff, and all money raised goes to support a very worthwhile charity.

Most of the auctions are still within reach of the average fan - Homeworld 2, for instance, is up to $55, less than it sold for when it was a new release - but with more than four days remaining, there's still plenty of time for prices to climb to the point that only Notch can afford them. But maybe you'll get lucky - and hey, even if you don't, at least you'll get to jack up some other guy.

Sony to eBayers: Flip This Joe 5 Comments
Comments on