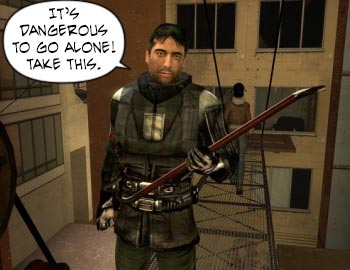 An anonymous source warns of a very different Half Life game arriving "after 2013."

Put on your speculation hats, kids, it's anonymous source time! Right now, Half Life 2: Episode 3 seems like a ludicrously distant concept. Half Life 3 even more so: The game is so far off that conversations about it start to sound like science fiction. But while we wait for the gears at Valve to finish (or indeed, begin) turning, we can keep ourselves entertained with some wild, unsubstantiated rumors passed on to a French gaming website from a "reliable" anonymous source.

According to this source, Half Life 3 has had a somewhat troubled development cycle, and Valve has killed and "revived" the project several times. That's hardly Deepthroat-level information gathering: Valve is notorious for scrapping and restarting its projects - I mean, take a look at these early Team Fortress 2 screenshots. More interesting are the claims that the latest incarnation of the game sports an open-world, quests and NPCs the player can interact with. If true, that would not only be a departure from Half Life's established gameplay, but from the tightly-structured, linear narrative style that's become synonymous with Valve's single player games.

Outlandish? Perhaps, but not impossible. Half Life 2 dwarfed its predecessor in terms of scope, so it wouldn't be completely ridiculous to imagine that Half Life 3 will do the same. Either way, we're going to be waiting for a while: The game will apparently launch "after 2013."

Earlier this year, Valve Time managed to dig up some Episode 3 concept art from 2008. A common fan theory holds that Episode 3 has in fact been canceled, and Valve is hard at work integrating its content into Half Life 3. Valve is staying quiet, though when asked about the project on Spike TV, Gabe Newell responded with, "I hate sharks."

Non-Player Counselor: Gordon Freeman Is Why There's No Half Life 3 Firefilm 15 Comments

Half Vive The Wooster 36 Comments

Hexproof: Fetchlands Reprints are the Half-Life 3 of Magic Slycne 11 Comments