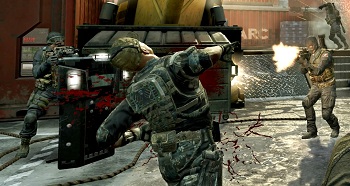 The release of Call of Duty: Black Ops 2 is drawing near, and one console is getting singled out for a special feature. According to the game's director, David "Vahn" Vonderhaar, the PS3 version of Black Ops 2 will have an option to install HD textures to the hard drive, though it might not be for the reasons you'd expect.

In a forum post on the official Black Ops 2 boards, Vahn explained that the install won't necessarily increase performance, but it will make sure the PS3's Blu-Ray drives last longer. As he explains:

This is one the fans having been asking us about demanding for a bit. Black Ops 2 has an option to "Install Textures to HDD."

When we explained to PS3 folks that installing to the HDD wouldn't neccessarily give us any significant performance gains, they explained back that the issue is they play so much it puts constant stress on the Blu-ray drive and wears them out.

It's a non-trivial amount of HDD space to install all the textures. I don't want to get into exactly numbers because anything can, and does change during development.

You don't have to install to enjoy the game. We still pre-cache like we did on Black Ops.

Since all needed texture files are loaded into memory before a round even begins, performing the install would only affect loading times - not the match itself. Competitive players shouldn't be afraid that someone else's large media library might cost them a competitive edge.