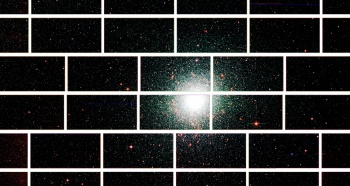 The most powerful camera ever made has begun seeking answers to one of science's biggest questions.

The universe is expanding. Did I just blow your mind?

Hopefully not. We've had a pretty good idea that space is growing for a decent while now, but only just recently wrapped our collective noggins around the fact that the inflation is actually accelerating. So who's got their fat cosmic foot on the gas pedal of space? Supposedly, it's this guy, Mr. Dark Energy, whose mugshot you can see to the right. These stitched-together photos were all captured by the very creatively named Dark Energy Camera (or DECam for short), a 570-million-pixel, 62-CCD, galaxy-scanning picture box capable of snapping photos that are, holy crap, twenty-times larger than the moon.

Now, you may be squinting at the compiled space shots, thinking, "Hey! This ain't no dark energy! This here's just space!" And you, my good (wo)man, would be both wrong and right. A whopping 73% of space is dark energy (probably), busy hustling anti-social celestial objects away from us at varying speeds of quickness. DECam, all the while, is there to document that magic by snapping photos of 100,000 different galaxy clusters and 4,000 separate supernovae.

So, how do a bunch of strung together space pics teach us anything about dark energy? Like a good murder mystery, the answer lies in a preponderance of the color red. Red is sort of a special color in the scientific community, laying claim to both the lowest frequency and the longest wavelength. This has a few interesting implications. Objects in space move faster the farther away they are from us, which causes a distinct change in how we see them. More specifically, the father away something gets from us, the more we perceive the light bouncing off of it as red. Sort of weird, right? This phenomenon is called "redshift," the visual result of wavelengths appearing to stretch during motion.

With this special photographic mapping, the dudes responsible for DECam may be able to extrapolate the expansion history of space going back billions of years! This, in turn, will help them and other scientists chart the earliest organizational patterns of our universe, and perhaps even finally track down those rascally baryon acoustic oscillations, or "sound echoes" of the Big Bang.

Exactly why the universe's expansion is speeding up rather than slowing down is sort of a big deal, as Einstein's theory of relativity kind of implies the opposite. This is admittedly a simplistic explanation, but if you think of space like a taut sheet, and objects of mass (like this Earth thing we stand on) as a bowling ball at it's center, everything around the ball should slowly follow the slope inward. So how entire galaxies suddenly seem to be scooting father away, incredulously picking up pace all the while, is a bit of a head-scratcher worth looking into.

DECam itself is about the size of a TARDIS (that would be the outside, not the inside - though, I've never been in there, so who knows) and currently resides on top of the Victor M Blanco telescope in Chile. Over the next five years, the camera is scheduled to photograph 300 million galaxies, approximately an eighth of the known sky. Wow. There's still a butt-load of stuff we don't understand about how this crazy universe place really works, but at least it seems that with the help of DECam, we're getting just a tad bit closer to erasing that pesky "un" from "the unknown."