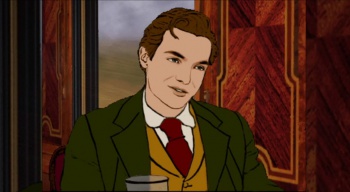 Now you can play the classic railway mystery while actually on a train.

The "mystery on a train" setup is not what it once was. Back in the 20th century, it seems like all you needed for a decent detective yarn was a train and a murder (bonus points if it's in Europe during the Victorian era), and bam: instant drama. This formula worked for everything from Murder on the Orient Express to Silver Streak, and it came to the land of gaming as The Last Express fifteen years ago. This point-and-click adventure game is now making its way to iOS, so a whole new generation can experience the joys of railway homicide and intrigue.

In 1997, Jordan Mechner of Prince of Persia fame released The Last Express to considerable acclaim. The game, which channels equal parts Agatha Christie, Alfred Hitchcock, and Steven Spielberg, casts the player as Robert Cath, an American traveler aboard the last pre-World War I voyage of the famed Orient Express from Paris to Constantinople. The game uses puzzles, light animation, and a prodigious amount of voice acting to weave its yarn. The iOS port aims to keep the game basically the same, while adapting the controls for a touchscreen and making the interface a bit more user-friendly.

Ever since the advent of the Nintendo DS, the point-and-click adventure genre has seen a mild resurgence. Its relaxed pacing, emphasis on logic over twitch reflexes, and touchscreen friendliness makes it an attractive choice for quick bursts of play. The Last Express did not do very well in its initial run, but now it will get a second chance to wow people with its interesting story and innovative mechanics - or else leave them frustrated with its fifteen-year-old production values and design decisions. All aboard!