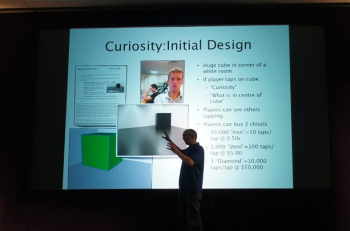 The Cube has no tutorial, which - according to Molyneux - is half the point of the game.

In a recent interview Peter Molyneux, founder of 22 Cans and creator of Curiosity - What's Inside the Cube, admitted that the whole concept of making a game like Curiosity terrified him. "Why didn't I just do a game?" Molyneux lamented, but though he regretted his tendency to play to what he described as the "big vision, this big idea," he's still keen to see the final result.

There is no tutorial, and that's the point, Molyneux claims. He wants to see whether people can motivate themselves to find out how Curiosity works. Not having a tutorial doesn't have to be a deal breaker; as recent hits have shown, letting players find out on their own how the experience works can be a big part of the fun.

Moreover the experience isn't limited to chip, chip, chip and then chip some more; though the point of it all is to find out what's in the center, there are other secrets to discover. Molyneux wants to encourage experimentation, and the only way to do that is to reward experimenters. For instance, each time a piece is chipped off it sounds a musical note, encouraging players to create chains of sound by planting firecrackers to detonate all at once. There will be other things to find, but players will have to find them out themselves.