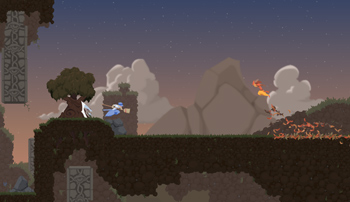 The Humble Indie Bundle 6 lineup already stands as one of the best in the promotion's short history, particularly if you have a taste for quirky platformers. Now it's gotten even more alluring thanks to the addition of four new games.

Pay more than the average (which stands at $5.95 at the time of writing) and you'll get Bit Trip Runner, Gratuitous Space Battles, Jamestown, Wizorb, and Dustforce as well as the basic bundle of Rochard, Shatter, S.P.A.Z, Torchlight and Vessel.

They're all great titles, and everyone will have their own favorite. For me, it's Hitbox Team's horrifically difficult yet somehow serene platformer, Dustforce that stands out. Wizorb too, it's a very clever riff on the traditional Breakout formula.

The Humble Indie Bundle 6 ends at midnight next Tuesday, which should give you about six minutes to prepare for the next one.