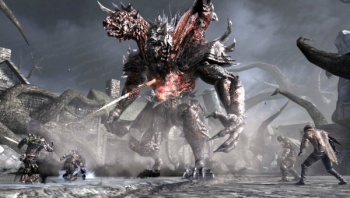 Co-operative gameplay has undergone a bit of a resurgence in recent years, thanks to the success of a few very popular co-op games. Sharing a game experience with friends can be highly entertaining, but if there is one drawback to co-op gameplay it's that the feature doesn't lend itself well to storytelling. Co-op gameplay and player conversations can distract players from finer plot points occurring on screen, which is why games like Borderlands or Left 4 Dead avoid unnecessary exposition altogether. Former Mega Man creator Keiji Inafune isn't sure it needs to be this way, and thinks he can prove it with his upcoming Vita exclusive Soul Sacrifice. All it would take it a minor addition to boss battles: if your group is going to survive, then one player character must die.

"In a typical game these days it's about earning points and defeating a certain number of enemies," Inafune explains, "That kind of game was probably an old style game ... Some of the newer games might make you cry. If they have a good story it's like watching a movie. So we wanted to incorporate that emotional aspect into this new game."

Soul Sacrifice is a standard fantasy title at first glance. You play as a captured sorcerer awaiting execution who discovers a ancient talking book that can create a portal to a parallel universe. While you cannot directly escape through the portal, you can project yourself into the bodies of sorcerers fighting monsters on the other side, gaining the experience needed to escape in the process. Now the twist: the most challenging monsters your sorcerer can encounter are too powerful to defeat, even with the aid of co-op partners. "It's not that you're not doing well," Inafune says. "It's physically impossible."

The only way players can defeat these enemies is if a member of the group is sacrificed, pulling off an incredibly powerful kamikaze move in the process. More importantly, these sacrifices aren't necessarily willing; a downed player could suddenly find themselves sacrificed by a teammate hoping to bring the battle to a quick conclusion. As the game progresses, players who frequently sacrifice friends and fallen enemies to gain power will find their physical appearance changing along with their stats and relationships to NPCs.

It's an interesting concept, and while the execution itself remains to be seen, Inafune believes it could provide meaningful character development and moral choice to co-op campaigns. "You're asked to make the choice every step of the way," Inafune continues. "Depending on who you're playing with, you'll have a different story every time ... There's no one right answer. I want to leave it to the player to choose and make decisions. And to think about those decisions they've made."