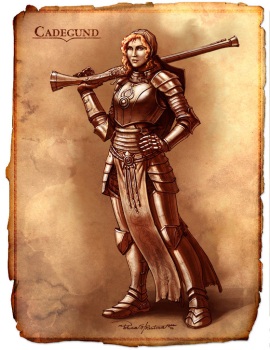 "The Endless Paths of Od Nua" is a multi-level dungeon that will get bigger as the number of backers continues to grow.

Most Kickstarter "stretch goals," at least as I understand them, are based on money: the more people pledge, the more stuff they get. But for "The Endless Paths of Od Nua," Obsidian took a bit of a different approach, adding it to the Project Eternity RPG as a reward for hitting 50,000 backers.

"Most that is said and written of the place is fiction or conjecture, more likely to have sprouted from the svef-enhanced imaginations of bored and boasting mercenaries than from any seed of truth. Hosts of lost souls that relentlessly stalk the living, cathedral-sized tombs overflowing with the restless victims of a horrific plague, lightless chambers sealing in the remnants of Od Nua's failed experiments," the dungeon's description reads. "Most legends converge on a common theme: that under the castle rest myriad forgotten vaults of death and darkness glittering with Od Nua's enchanted creations and the abandoned treasure of ill-fated interlopers. So great is the fear of the castle's denizens that even drunken and drug-cheered adventurers do not joke of setting foot on the paths, lest their souls join the eternal ranks of those that have gone before them."

The Endless Paths will go three levels down to start, but another level will be added for every 2500 new backers. If Project Eternity hits 60,000 backers in other words, Od Nua's catacombs will be seven levels deep. That sounds incredibly hot.

Obsidian has also added a new "crafting and enchanting" stretch goal at $2.4 million, which will allow players to use items found in the game to create potions, scrolls and gear upgrades that won't be available through other means. The $2.2 million stretch goal, which adds a new region, faction and companion, was passed earlier this morning.

The Project Eternity Kickstarter runs until 9 am EDT on October 16.