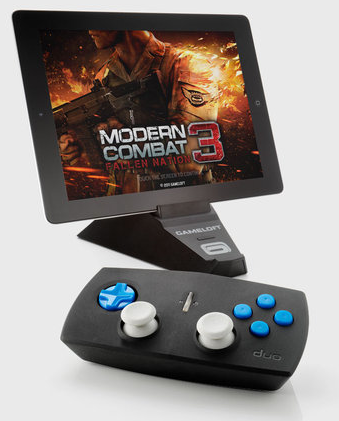 The Gamer Duo is coming soon to Apple retail stores ... where it will likely stay put.

Popular mobile developer Gameloft has announced what's now the first Apple-certified Bluetooth game controller on the market: The Duo Gamer. And while the device might not be the schizophrenic Nintendo-DS-themed superhero its name suggests, it may end up being just as unwelcome in people's closets when they learn the details.

The Duo Gamer is hitting shelves at a hefty $80, possibly a fair price considering that it will be the first mainstream controller to work natively with the iPad's Bluetooth connectivity - unlike the popular iCade - but here's the rub: The Duo Gamer will only be compatible with Gameloft games, and to make matters worse, only five of them: Asphalt 7: Heat, Brothers in Arms 2: Global Front, Modern Combat 3: Fallen Nation, N.O.V.A. 3, and Order & Chaos Online.

Though Gameloft titles are traditionally, well, "inspired" by popular games, they're typically pretty dang good for what they are. And while the harsh limitations on the company's new controller will likely be a deal breaker for some, it's hard to deny that seeing your iPad as a wee little TV with its own controller is at least sort of cool. Still, with such a teeny stable paired against hefty price tag, its hard to imagine the Duo Gamer achieving what's supposed to be easier than earning a spot on Apple's coveted retail shelves: getting off of them.