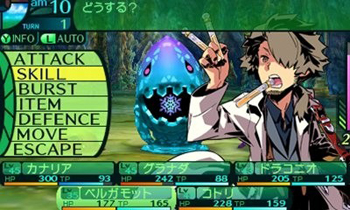 The Etrian Odyssey series makes its 3DS debut with the "brutal challenge" of Legends of the Titan.

If you've been craving a hardcore dungeon-crawling experience for your 3DS, the wait will soon be over. Atlus has announced that Etrian Odyssey IV: Legends of the Titan will be making its way to North America. Legend of the Titan, which launched in Japan earlier this year, was "built with older hardcore gamers in mind," and will retain the series' trademark difficulty.

Featuring enemies rendered in 3D and "intricately detailed" environments, Etrian Odyssey IV strives to be "a brutal challenge and not for the faint of heart." Don't be scared, new players--a brand-new Casual Mode "ensures newcomers to the series and genre need not be intimidated." Like previous games in the series, players need to map out their own paths while exploring dangerous locations filled with powerful foes, this time in search of the roots of the legendary Yggdrasil tree (and fame and fortune, naturally).

Etrian Odyssey IV: Legends of the Titan will be the series' first appearance on the 3DS. It's scheduled for release in early 2013, though no specific release date was given.