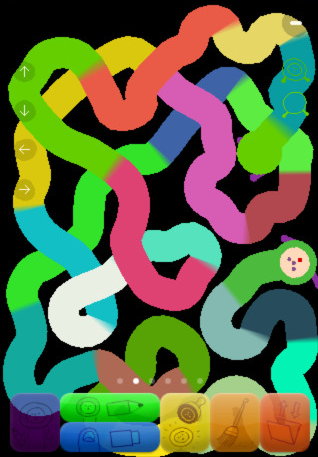 After nearly three years, the creator of Katamari Damacy's latest is leaving iOS in October.

The reasons for doing so are still unclear, but Namco Bandai intends to pull Noby Noby Boy - the quirky stretch puzzler put together by Katamari Damacy creator Keita Takahashi - from the iOS store, effective October 9th. "We are sorry to inform you that this application will soon be unavailable from the App store," is all the official announcement says, and this means that there will be no more updates or fixes for the app.

Not that fixes have been all that frequent in the past, as the game's Facebook connectivity has been glitchy at best for a while now. Judging by the comments at the iOS store, frequent crashes are also a problem. Still, the game has its fans, chief among them Takahashi, the man behind the Boy. Takahashi said in a blog post that he was very sorry to see Noby Noby Boy go.

"[Noby Noby Boy] is totally silly app but I'm enjoying it sometimes even now," Takahashi said. "Thank you for playing this silly app."

Though the game had a lot of fan support, its unique gameplay meant it wasn't for everyone. You played as the Boy who could stretch out his abdomen. "That's all there is to it," explains the Fairy who serves as narrator, "except, of course, there are so many ways to stretch him. That's what makes the game so much fun." Points are gained and can be submitted to Girl up in space who then unlocks new levels; the intent being to explore the solar system, stretching out from Earth to the stars.

Though the Namco Bandai announcement doesn't make it clear, the points submission was done online and, since functionality is cut, presumably Girl no longer accepts points after October 9th. That means Boy has explored as much of the iOS universe as he ever will.