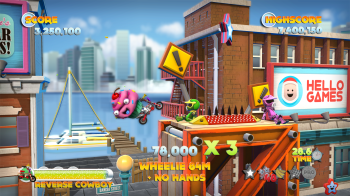 The PSN release of Joe Danger 2: The Movie will include the "Joe Danger Gaiden" version of the first game.

As promised, the PSN version of the game will include bonus content, which has been detailed by creator Sean Murray of Hello Games. Calling it "Joe Danger Gaiden," it's actually the original form of Joe Danger before it was made more accessible and less difficult. "What's cool is it's a complete game that takes easily ten hours to complete," Sean said of the "Gaiden" version of the original game. "Many of the levels will be familiar to fans of the original, and others are experiments that we loved but were too challenging or quirky for the main game." The developer even added some content from Joe Danger 2 into these original levels, like pro medals and hidden challenges.

The PSN version of Joe Danger 2 also adds "Youtube support, better level-editing, smoothed out the difficulty spikes, and basically any other feedback we could reasonably listen to."

An iOS version of Joe Danger 2 is currently in development, but there's no word on when that will be available. Since Joe Danger originally appeared on the PSN in 2010, it's only fitting to see the sequel return to the platform.