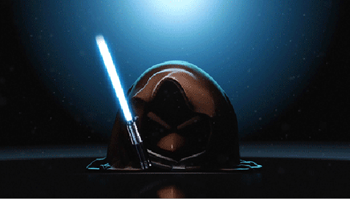 A Star Wars-related Angry Birds announcement is coming next week.

This image was posted on the brand-new Angry Birds Tumblr earlier today with zero explanation, other than it was "a clue" about what would be featured on the blog. The easy conclusion to jump to is that there's some kind of Angry Birds/Star Wars crossover in the works, though whether that means a game, toy, or something else entirely remains a mystery.

It won't be too long before we find out more, though. "Times Square, New York, October 8th, 10am EST" was the place, date, and time given on the Tumblr, meaning that on Monday we'll have an idea of just what this bizarre crossover entails.

The Tumblr also urged fans to "head to Toys R Us at 8am EST" on Monday, though of course it didn't say why. In the meantime, we can just speculate about what kind of lightsaber shenanigans Angry Birds developer Rovio Entertainment is planning.