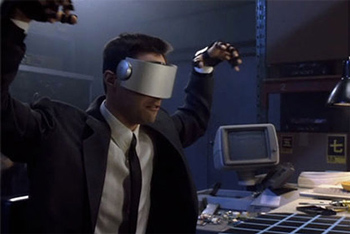 "Our Experiments soon proved that micokernelizing our PDP 11s was more effective than exokernelizing them."

Here are a few excerpts from an article called Nmap: The Internet Considered Harmful - DARPA Interference Checking Kludge Scanning. The article ran in the latest eBook edition of Hakin9's guide to Nmap, the popular security scanner.

"Unlike other authors, we have decided not to enable time since 1967 [20]. Along these same lines, we are grateful for randomized kernels; without them, we could not optimize for usability simultaneously with simplicity."

"Had we prototyped our heterogeneous cluster, as opposed to simulating it in courseware, we would have seen degraded results. First, cyberneticists added 10GB/s of Internet access to our network. Further, we removed a 7TB USB key from our highly available cluster to consider our Xbox network."

Are those perhaps a bit too subtle? How about this code that appears on the second page of the article.

The article is, of course, absolute gibberish. There's no such thing as DARPA Inference Checking Kludge Scanning, or DICKS as it's often called. The article was submitted to satirize the magazine's less-than-competent fact checking as well as its habit of spamming security researches with requests for them to submit articles for free. Hakin9 ran the piece in its entirety, ASCII dongs and all.

"Maybe they were sick of Hakin9's constant please-write-an-unpaid-article-for-us spam and decided to submit some well-crafted gibberish in response," security researcher Gordon Lyon (Fyodor) wrote in a post to the popular seclists mailing list last week. "They clearly chose that title so just so they could refer to it as DICKS throughout the paper. There is even an ASCII penis in the 'sample output' section, but apparently none of this raised any flags from Hakin9's 'review board'."

Hakin9 has since apologized to its readers for the "accident."

"We can only wish that this, hopefully, single error will not undermine the general perception of Hakin9 as a professional magazine; offering the highest standard possible. We would also like to kindly ask you not to pass any judgement on the authors collaborating with us, who devote their time and put their hearts into the quality of every issue."

The fake article bears a resemblance to physics professor, Alan Sokal's, hilarious Transgressing the Boundaries: Towards a Transformative Hermeneutics of Quantum Gravity, in which he argued that quantum gravity was a social and linguistic construct, mainly to see if a magazine called Social Text would run an article made entirely out of nonsense. It did.

Gallery of the Day: 8 Miniseries That Will Have You Rethinking Television DrStrangelove 4 Comments