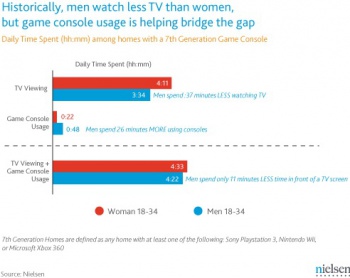 According to Nielsen, men and women spend almost exactly the same amount of time watching a television screen every day.

For quite some time now, experts from a variety of diverse fields have argued that men and women are actually more similar than a certain self-help book implied. There can be subtle differences between the sexes in areas like math or spatial awareness, but society is slowly coming to grips with the fact that women are just as active as men in sports, politics, playing videogames, and perhaps even laziness. According to a recent study by Nielsen, men and women spend equal amounts of time in front of television sets every day, with a difference of mere minutes separating the leisure habits of men and women.

Women initially surpassed men in average TV viewing time at 4 hours and 11 minutes daily. Men came in second with 3 hours 34 minutes, but those figures change the moment you include time spent on videogame consoles. Taken on the whole, men and women spend approximately 4 and a half hours per day in front of a television screen, whether a remote or a console controller is at hand.

Obviously a report like this should be taken with a grain of salt. It's not entirely clear what the limitations of the study are, such as whether the sample group made use of streaming services like Netflix away from the television. That said, it wouldn't surprise me at all to discover that men and women share near-identical leisure habits, and more common ground is always a good thing. As long as we can agree on which show to watch, at least.