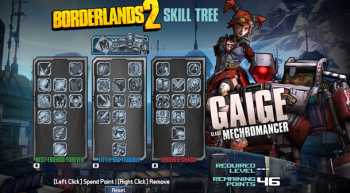 All platforms now have access to the Mechromancer Borderlands 2 class.

Randy Pitchford, Gearbox's CEO, pulled a rabbit out of his hat earlier today when he announced on Twitter that the Mechromancer Borderlands 2 class would be out one week early. It was due next week, but instead is out for all platforms now.

There are two other skill trees to consider: Little Big Trouble, and Ordered Chaos. Little Big Trouble is a damage buffer with an emphasis on burn effects and electrical whup-ass. The final skill in that tree turns Deathtrap into a sparkly metal vampire capable of doing increased elemental damage when charged with that element. Ordered Chaos is a speed and damage buffer that at higher levels makes use of Anarchy, a stat that decreases accuracy but increases damage when you hit. The more Anarchy you have stacked the better damage you do, particularly at the highest skill in the tree, With Claws.