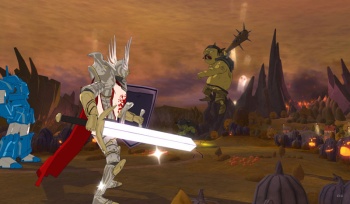 Dubbing the month "Rocktober," the gang at Double Fine is offering sales as high as 81% on its most popular titles.

If you're a Costume Quest nut, a Brütal Legend aficionado, or just happen to like pretty much whatever Double Fine puts out, then welcome to Rocktober, the month that keeps on giving. Double Fine has decided to put every single game it ever made on sale this week, on every platform those games are sold.

Say you have Costume Quest on Steam already, but wouldn't mind having it on Xbox Live too. It can be yours, for 50% off the asking price. In fact, pretty much everything Double Fine has is at least at 50% off, with the exception of Brütal Legend - 81% off on Xbox and PS3 - and Once Upon a Monster, which Amazon is selling at a mere 15% discount. Still, it's a discount; a full list of all titles and the percentages off can be found here.

"You're probably having trouble deciding which of these ridiculous deals to take advantage of," says Double Fine. "Let us help: all of them." Now there's a cunning plan!