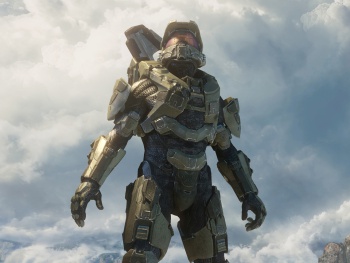 Halo fans will need to tune in to Late Night with Jimmy Fallon on October 18th to catch the latest glimpse of Master Chief in action.

The Social Network director David Fincher will show off his production prowess with a live action Halo 4 launch trailer set to debut on October 18th. The video was shot in the city of Prague in the Czech Republic and will reportedly flesh out some of Master Chief's backstory, though specific details are of course being kept under wraps.

The trailer is titled Scanned and will first be shown during the October 18th episode of Late Night with Jimmy Fallon. Tim Miller - who will be directing the upcoming Deadpool flick starring Ryan Reynolds - has taken on directorial duties for the live action ad.

Joining the project with Hollywood hits like Fight Club and The Curious Case of Benjamin Button under his belt, Fincher's involvement is a pretty big deal. Trailers for previous Halo titles have historically been met with much fanfare, and it appears Microsoft is sparing no expense in continuing the trend.

Of course, we're just talking about an advertisement here.

Meanwhile, the Halo movie - you know, the full-length feature that would actually need a quality director and producer if a deal could ever be struck - can't seem to catch a break. Due to monetary issues the project hasn't yet gotten off the ground, and until it does, brief trailers are as close as fans will get.