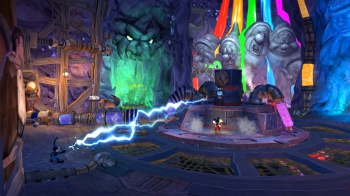 When I first played Epic Mickey 2: The Power of Two at E3 earlier this year, I was disappointed by the problematic camera, which had also been a huge issue in 2010's Disney Epic Mickey. So when designer Warren Spector said that the developers listened to fans' complaints when making the sequel at a NYCC roundtable, I was hopeful, but skeptical. When I played it again, I was a lot less skeptical.

According to Spector, there were three things developer Junction Point Studios could have done better when making Epic Mickey: the camera system, the silent characters, and the lack of persistent changes to areas that had been inked or thinned. All three of these issues have been addressed in the sequel. Not only is there voice acting, there are full musical numbers, with characters singing original pieces that will sound slightly different depending on how the game is played. Spector admitted that making a musical video game "sounds kind of wacky", but he also acknowledged that it was a great way to celebrate Disney's legacy and creative history.

What's most interesting about the new voice acting is that Oswald the Lucky Rabbit, Mickey's oft-forgotten older brother, never had a voice before Epic Mickey 2. He existed solely in the silent film era, and Junction Point worked with Disney to give Oswald a voice for the first time. Oswald was antagonistic in Epic Mickey, but moves to a starring role alongside the world's most famous mouse as one of the playable characters. Mickey and Oswald work together cooperatively, with drop-in/drop-out two-player co-op being a major addition to this sequel.

One of the most frustrating things about Epic Mickey was having your changes erased as soon as you left an area. I could spend a good amount of time using thinner to erase structures, or painting in the gaps, and when I came back later, those changes had been reverted. In Epic Mickey 2, "choices are forever."

Before my hands-on time, Spector revealed a few more of The Power of Two's new features. Characters can now buy or earn pieces of costumes, and when a full costume is assembled, it grants the wearer a special ability related to the outfit. Mickey and Oswald can hop into inkwells, which will make them invulnerable or invisible, depending on how the game is played. A photo mode lets you take in-game pictures at certain locations, which is required for some quests. We also got to see concept art from two new areas, Disney Gulch and Rainbow Caverns, based on former Disneyland attractions.

Everything that was shown off during the roundtable looked great, but the camera issues I experienced at E3 were still on my mind when it came time to play Epic Mickey 2. Right away, though, I noticed a big change: there were now two camera options that could be toggled by pressing select. One was the centered camera that had been so problematic, but the other allowed for manual camera control using the right analog stick on the PS3 controller. I switched over to manual control and noticed a huge improvement right away.

With the right analog stick now used to aim and control the camera, making my way around Rainbow Caverns was a snap. It gave me a chance to look at Mickey's surroundings: the waves of colored paint falling over sculpted versions of the dwarfs from Snow White, the nooks and crannies that could be thinned out to reveal hidden treasures, and the moving platforms that could be used to fix the broken pipes spewing paint throughout the area. Another player took control of Oswald, and we had to work together to advance.

It's still not perfect. Some jumps were hard to judge, the camera had a tendency to rest too low behind the character, and the automatically centered camera is still a pain. But those complaints are a lot easier to deal with than a fundamentally broken camera that can make tricky platforming sections frustratingly difficult, which happened a lot in the first game.

After completing the objective in that section of Rainbow Caverns, we jumped into a projector screen for a 2D side-scrolling platforming section, one of my favorite parts of Epic Mickey. Spector says that he was surprised by how much people loved those aspects of the first game, and in the sequel, they have different entrances and exits instead of placing gamers on a straight path. Like in the 3D world, I had to work together with my co-op partner to gather collectibles and exit the level, which spit us out in another section of the cavern, which is where my time with the game ended.

Unlike my E3 preview, which left my co-op partner and me frustrated, my time with Epic Mickey 2 was full of laughter, shouts of glee, and awe at the impressive nods to Disney's legacy found throughout every area. I'm a little worried about what would happen if I didn't have a co-op partner, since I didn't get to play with an AI Oswald, but a lot of my concern about this sequel has been washed away. As a fanatic Disney enthusiast, I'm now very much looking forward to Epic Mickey 2: The Power of Two, which will be released for the Xbox 360, PS3, Wii, PC, and Mac on November 18, with a Wii U version due out this holiday season.