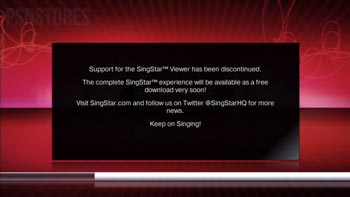 Get your karaoke on for free. Kind of.

The music game market may have crashed and burned back in 2009, but that hasn't stopped a few developers from sifting through the wreckage in search of profit. Sony is no longer popping out Singstar games every six months, but the 8-year-old karaoke series is still helping shift extra song DLC.

Previously, the SingStar Viewer app for the PS3 allowed users to check out the game's content for free, but players still had to buy a copy of the game to actually engage in some embarrassing crooning. The app is being discontinued, but in its place Sony promises the "Complete SingStar experience will be available as a free download very soon."

The game still requires one of SingStar's proprietary Microphones, but I've seen those going for about the same price as a bag of skittles in my local GameStop.

Giving away the game for free and charging for individual songs seems like an obvious way to pull in the casual gamers that form the bulk of SingStar's audience. So obvious, in fact, that I'm surprised no one else has done it yet. Then again, the consoles have been slow to embrace F2P gaming. The 360's first free-to-play title, Happy Wars, came out just this month. Sony has been a little more proactive, but still only boasts three or four free titles on the PS3.