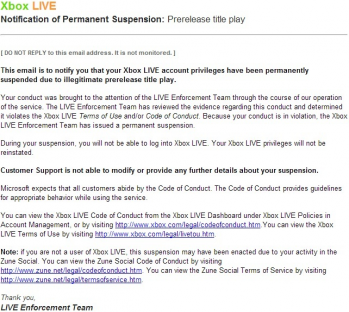 A Halo 4 walkthrough appears and disappears on YouTube, as pirates torrent the game.

Last week Halo 4 leaked, and YouTube walkthroughs popped up as the game became available through torrent sites. Now those YouTube videos are down, and Microsoft has issued permanent bans to those who pirated the game.

Microsoft's letter to affected users confirms that their accounts will not be reinstated. "This is why you don't take your modded console online," was a sentiment echoed several times by Reddit users. The Xbox Live enforcement letter was posted to Reddit by user Storm360, who claimed it hadn't been his account that was banned.

Halo 4 developers 343 Industries remain unfazed by the piracy. Franchise director Frank O'Connor said piracy of high-profile games was inevitable, adding that Microsoft would address the walkthrough videos a case at a time. "It just takes a little while to handle," O'Connor said.

Halo 4 is scheduled for legitimate release on November 6th.

LoadingReadyRun: Ways to Get Video Ideas Graham_LRR 8 Comments
Comments on