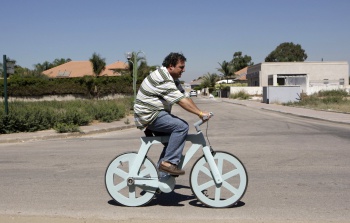 Using cardboard for boxes is so 2011.

While in many American and European cities, the bicycle is looked at as the cheap alternative to driving a car, there hasn't really been much thought put into finding the cheap alternative to riding a bicycle (those ratty tennis shoes you've had for eight years excluded). Izhar Gafni hopes to change that with his latest invention, a $9.00 bicycle made entirely of cardboard that he believes is "a game-changer."

"Making a cardboard box is easy and it can be very strong and durable, but to make a bicycle was extremely difficult and I had to find the right way to fold the cardboard in several different directions," Gafni claims. "It took a year and a half, with lots of testing and failure until I got it right."

Gafni's wonder-bike won't just mind-bogglingly support your weight, but is also both waterproof and fireproof, a feat accomplished via a secret organic spray that, reportedly, has kept one of his bicycles hard even after being immersed in water for several months. Currently, the chain is replaced by a car's timing belt, and the tires, created from reconstituted rubber, not only can't go flat, but last without filling for ten years.

"When we started, a year and a half or two years ago, people laughed at us," Gafni said, "but now we are getting at least a dozen e-mails every day asking where they can buy such a bicycle, so this really makes me hopeful that we will succeed."

The bike, if it works as reported, isn't just an amazing feat of engineering, but also of production. With a per unit cost of $9.00, there will be no financial incentive for businesses to produce the bicycles in cheap labor markets. Perhaps even more impressive is that fact that the vehicle is made from 100% "green" materials, allowing for government grants that neutralize the production cost, and allow the bikes to be distributed completely free of charge in poor and developing nations.

While you can't pick up one of these magical voodoo bikes yet, Gafni claims that in just six months, plans will be set in motion for an urban bike assisted by a rechargeable electric motor, a small bike (about 2/3 the size of an adult's) for African children, a "balance bike" for teaching people to ride, and even a wheelchair. As for the distant future? Gafni sees his special cardboard used in cars and airplanes, though admits that's "still a way down the road."