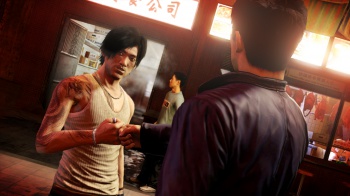 The upcoming Sleeping Dogs DLC campaign will require you to use Wei Shen's martial arts skills on monsters from Chinese mythology.

Sleeping Dogs is perhaps one of the year's most critically acclaimed games thanks to its unique setting and solid city-based sandbox gameplay. DLC expansions have inevitably followed, but so far they've focused on new items, races, and cop missions instead of additional story content. An upcoming Sleeping Dogs DLC campaign should whet the appetites of anyone looking for a new single-player experience, but with a very supernatural twist. Instead of pitting players against the Triad, the new campaign will feature creatures from Chinese mythology in the streets of modern-day Hong Kong.

The new campaign, titled Nightmare in North Point, will integrate themes from Hong Kong horror films with Sleeping Dogs' crime drama roots. After a gang member is tortured and killed by the Triad, he returns from the grave with an army of zombies and vampires straight Eastern folklore. Wei Shen, armed with some magical tea and some weapons from Chinese myth, is tasked with defeating the creatures before they overwhelm the Triad.

Sleeping Dogs certainly wouldn't be the first game to experiment with horror elements. Developer United Front compared North Point to Red Dead Redemption's Undead Nightmare, which combined the Wild West setting with a zombie apocalypse. Call of Duty: World at War introduced zombies to the military shooter, and even the Railworks 3 train simulator has a zombie-themed scenario pack. Bringing zombies to games is easy at this point, but whether United Front can provide a solid story experience to match remains to be seen. We'll find out when Nightmare at North Point launches in just two weeks on October 30th.