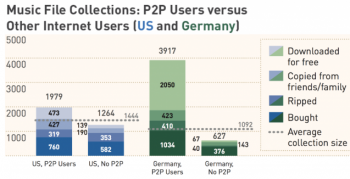 The American Assembly at Columbia University has been looking into music piracy, and its effect on the music market. Asking the question "where do music collections come from" led Joe Karaganis to some interesting results: among them, that people who download buy more music than people who don't.

Karaganis compared high-piracy groups, aka peer-to-peer downloaders, to low-piracy groups, who didn't indulge in peer-to-peer file sharing. Those who downloaded tended to get their music from friends, family, and free downloads; but they also were the ones buying more music. US P2P users tended to buy 30% more digital music legally than did their non-P2P counterparts, and as a rule consumed significantly more music overall.

"Our data is quite clear on this point and lines up with numerous other studies," Karaganis said. "The biggest music pirates are also the biggest spenders on recorded music." This was only one conclusion of a wide-ranging study, which can be found here.

Karaganis went on to warn that the problem posed by a "copy culture" could not be solved without ultimately declaring war on general purpose computing. "We should be careful and understand the real stakes," Karaganis said, "This isn't a debate about who pays for recorded music, but about how much they pay."

The American Assembly, which hosts Karaganis' work, is an agency dedicated to illuminating "issues of public policy by commissioning and issuing research," according to its website. Karaganis is also the author of, among other things, a research note on copyright infringement and enforcement, written in 2011 when SOPA was being debated.