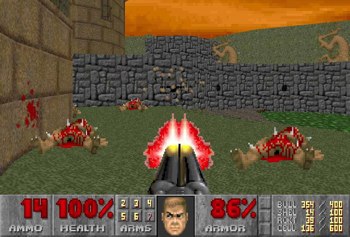 If you want to play the bonus retro titles included in this special edition, keep it off your Xbox 360's hard drive.

It's rare that a game publisher would advise against doing something that can extend the life of your game console, but that's just what Bethesda is doing when it comes to the just-released Doom 3 BFG Edition. It seems that due to a strange quirk with the Xbox 360 version of the title, those who decide to install the game on the system won't be able to access the bonus Doom or Doom 2 titles.

While there may be no performance benefit to this particular title itself, the ability to install games onto a console's storage device can extend the life of your hardware. Negating countless hours of disc spinning means fewer moving parts, and therefore less opportunity for something to go wrong.

There has been no official word on whether the title will be updated to tweak the unfortunate issue, though we can't imagine getting a couple of 18-year-old PC games installed and running on the Xbox 360 would be particularly difficult.