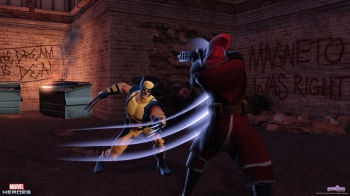 If you like superheroes and MMOs, there is a good chance that you've fired up DC Universe Online at one point or another. Now, be honest: Did you want to create your own character to share the spotlight with the existing heroes of the DC mythos, or would you rather have stepped into their shoes? While creating a unique persona is an experience in and of itself, those who want to take control of the iconic protagonists of the Marvel universe are in luck. Marvel Heroes, a free-to-play MMO from Gazillion Entertainment starring the Avengers, the X-Men, and just about every other big name from Stan Lee's imagination, is in the works - and on top of that, it just might be the spiritual successor to Diablo II.

In Marvel Heroes, players take control of a heavy hitter from comics. While mainstays like Spider-Man, Thor, and Daredevil show up on the roster, a few more obscure characters have also made their way to the roster: Cable, Rocket Raccoon, and even Squirrel Girl will be available at launch. In fact, Gazillion will provide 36 playable characters right off the bat, including Nova, Phoenix, and Luke Cage, who were announced at New York Comic Con this year.

Although a roster of nearly 40 heroes will alleviate the issue of multiple Wolverines running into each other at any given moment, Stephen Reid, the community director at Gazillion, believes that this occurrence won't be much of a problem. "Who the hell cares?" he jokes. According to Reid, each character will have a bevy of multiple costumes (across all the different characters, there are already more than 100 planned outfits) and a variety of possible builds. Gazillion has also taken care to ensure that each character feels unique. On paper, the Hulk and the Thing might seem very similar. In practice, however, the Hulk is a loner who is always on the run from the authorities, and therefore focuses on fast attacks and high DPS. The Thing, on the other hand, is a born-and-bred team player, and can provide a party with buffs and AoE techniques.

One of the minds behind the project is David Brevik, whom action/RPG fans may recognize as one of the major names behind Diablo and Diablo II. The Diablo II influence is clear from even a cursory play session: the superheroes control from an isometric perspective as they hack their way through waves and waves of enemies, deploying unique special skills as they go. Heroes can also collect useful equipment as they journey through randomized levels and change their looks as they craft costumes.

Brian Michael Bendis, one of the most prolific names in Marvel comics over the last few years, has written a brand-new story for the game, which Reid promises will be deep and stay true to the core essences of its colorful cast.

The free-to-play mechanics seem very gentle as well, as players can pay real money to unlock new characters and costumes. However, these assets will also be available through regular gameplay, so those with a lot of time on their hands can stand on equal footing with those who pay for convenience.

The closed beta for Marvel Heroes is going on now, so if you were lucky enough to grab a key at NYCC, you can register and check it out for yourself. If not, the game has no solid release date yet, but chances are good it will arrive well before Galactus devours the world.

Ant-Man - Honey, I Shrunk the Superheroes! Marter 25 Comments
Comments on