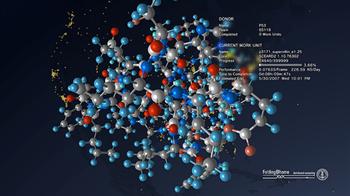 The PlayStation 3 withdraws from Stanford's distributed computing project after 100 million hours worth of protein folding.

[email protected] is a distributed computing project that lets you dedicate your idle processor cycles to fold protein structures, which provides useful data to researchers of Parkinson's disease, Alzheimer's disease and various forms of cancer. The PlayStation 3 was used as a platform to contribute to the research, but a firmware update at the end of this month will remove the [email protected] client from all of Sony's systems, and users will no longer be able to crunch numbers for the project.

The 4.30 firmware update will remove the Life with PlayStation section from the dashboard, which houses the [email protected] client. Sony hasn't offered any explanation as to why it has chosen to remove the client, which has been present on PS3s since March 2007. More than 15 million users have contributed over 100 million hours of calculations for the project.

Vijay Pande, the research lead for [email protected] at Stanford University, said that the system was a "game changer" for the project in terms of using new methods and processors to perform calculations.

"We have had numerous successes in recent years," he says. "Specifically, in a paper just published in the Journal of Medicinal Chemistry, we report on tests of predictions from earlier [email protected] simulations, and how these predictions have led to a new strategy to fight Alzheimer's disease."

Pande first considered the console as a viable means of distributed computing when it was released. He noted that the PlayStation 3's Cell processor provided a speed increase of 20 times more than PCs at the time. Its considerable processing power allowed researchers to run simulations that would have normally been considered impractical.

The project's next steps at Stanford are to develop a lead compound into a viable drug for Alzheimer's. "It's too early to report on our preliminary results there, but I'm very excited that the directions set out in this paper do appear to be bearing fruit in terms of a viable drug (not just a drug candidate)."