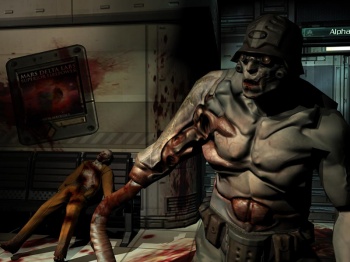 According to a hastily removed Steam listing, Doom 3 was briefly worth more than its own BFG Edition.

Doom 3: BFG Edition may have had a couple of hiccups at launch, but by and large the game is a great way to introduce new players to the franchise. Collecting and remastering Doom 1 to 3 with additional bonus content, id Software and Bethesda clearly intended the BFG Edition to be a definitive set for veterans and newcomers alike. But what if you just wanted a discounted, pre-BFG version of Doom 3? After BFG's launch, a quick stop at Steam's Doom 3 page informed gamers that the title was still available, but for the very surprising price of $99.99.

It turns out that after removing the option to purchase Doom 3 from Steam's catalog, the original game was left undisturbed in the $100 Super id Software Pack. This had the side effect of bumping Doom 3's listed price to a figure $70 higher than the BFG Edition, much to the ire of Steam users. The Pack did include the rest of id's back catalog, but anyone wanting to purchase Doom 3 by itself were simply out of luck.

The Super id Software Pack has been removed from Steam and the Doom 3 price listing taken down, likely so Bethesda can hash out a solution. "We do realize that there are fans that would like to purchase the original version of the game," a Bethesda rep stated, "and we're looking into options for them."

The BFG Edition might very well be superior to the original, but many gamers would still be frustrated if it were to disappear. Doom 3 once supported several fan-favorite mods that cannot be transferred to the BFG Edition, including a co-op mode that Bethesda is no longer pursuing. The original version will likely continue to draw support until the BFG Edition can implement such features, although I doubt many people would happily pay $100 for the privilege.