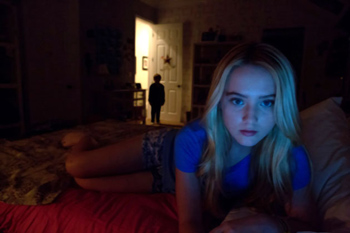 Technical screw up exposes children as young as five to a poorly-received horror film.

Families attending a screening of Madagascar 3 at a Cineworld in Nottingham, England, had to flee the auditorium, screaming children in tow, when Paranormal Activity 4 was shown instead.

The mostly pre-teen audience's poor response to the film wasn't just down to the fact it's terrible; Paranormal Activity 4 opens with one of the more surprising moments from the first film, a bloodied female corpse being hurled at the camera, no doubt surprising those expecting the dulcet tones of David Schwimmer as a neurotic giraffe. The film carries a 15-and-up rating in the UK.

As Nastasha Lewis, a mother who attended the film with her eight-year-old son, Dylan, puts it:

"They started playing the movie and I thought - this doesn't look right. And then I recognized the opening sequence as a flash back to the first movie, which I saw a couple of years ago. It opens on the most terrifying scene in the first film - where a body shoots full pelt towards the camera. It's enough to make grown men jump, so you can imagine the terror in these young faces. Everybody just scrambled for the exits, all you could hear were children crying and screaming. Everyone was very upset. I've watched a few horror films in my time but the 'Paranormal Activity' films are the scariest since 'The Exorcist'."

"It was only about two minutes worth of the film but it was enough to scar them for life," she continued. "There were parents and kids in there, including some children who were younger than Dylan.

"The cinema needs to check the film before sending everyone in so they don't make this mistake again. I'm disgusted about it, mistakes like this simply should not happen."

A spokesperson for Cineworld has pinned the mistake on a "technical error," and promises the company is taking steps to ensure it never happens again. The company offered the affected families refunds and complimentary tickets, and invited them to a second screening of Madagascar 3 half an hour later.