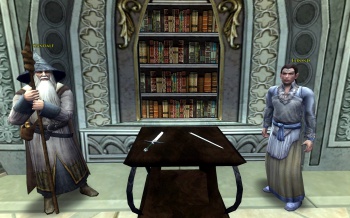 We don't know much, but Turbine might be the latest MMO company to thin its ranks.

Update: The Boston Globe reports that a Warner Bros. Interactive spokesperson confirmed the layoffs today with the following statement: "As part of the continual review of our business operations and fluctuating market conditions, we have had to make reductions in our Turbine workforce. The group continues to remain an integral part of Warner Bros. Interactive Entertainment."

We still don't know how many individuals were dismissed but we've heard reports that many different departments have been affected.

Original post: Boston-based Turbine has quietly been spinning along make a profit with its two now free to play MMOS - Lord of the Rings Online and Dungeons & Dragons Online. The former recently released a huge new expansion adding the nation of Rohan to its map - which I previewed here - and D&D Online has received many updates during its tenure. Today, a Tweet from a strange source in the Boston area - a recruiter for an internet startup incubator called Cogo Labs - is the first source to announce that Turbine will be laying off some workers.

"Sorry to hear about layoffs at Turbine today," Kevin Fanning wrote on Twitter at 1pm today. "Real nice game dev scene we used to have in Boston."

Keep in mind, these layoffs could be the now routine culling of extra staff that comes after a major product ships. Lord of the Rings Online: Riders of Rohan came out on October 15th, so such redundancies would only make sense. Turbine has hired a bunch of developers and staff recently though, most notably Ken Rolston formerly of 38 Studios before it blew up and Bethesda, perhaps for a new project. If that's the case, it seems odd to lay people off instead of shifting staff to the new game.

There doesn't appear to be any confirmation from Turbine or parent company Warner Bros. Interactive yet. I've sent emails to both companies to confirm or deny the layoffs, and I'll update this story if I hear more.

Trailers: The Lord of the Rings Online: Rise of Isengard Team Hollywood 8 Comments

Critical Miss: The Lord of the Zings The Wooster 94 Comments