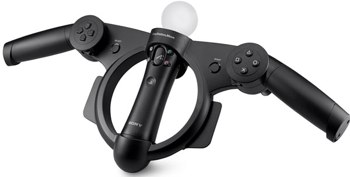 Early adopter finds that Sony's new accessory adds waggle to every game on your shelf.

Regardless of your feelings for or against the practice, motion control is now an inescapable part of gaming as a whole. However, the majority of games for the Xbox 360 and PlayStation 3 don't rely on the new mechanic, and Kinect- and Move-specific titles are the exception rather than the rule. But fear not, it seems the newly-released PS Move Racing Wheel can add motion controls to any PlayStation 3 game, regardless of its advertised compatibility.

iWaggle3D is reporting that a reader has tested the wheel with several games not officially compatible with Move, and found that the controller still works. The accessory is only recognized by the PlayStation 3 system as a racing wheel for compatible titles like Burnout Paradise and ModNation Racers, but when playing a game without Move support, the controller can be used in place of a DualShock 3. Then, while playing the game, you can tilt the controller for movement and other in-game actions instead of using an analog stick.

Albert Chen, the reader in question, even tweeted a photo showing a section in the controller's manual detailing how to use the motion controller on other titles. He tested the controller on unsupported games such Need For Speed Shift 2, Gran Turismo 5, and Sonic The Hedgehog 2, and found that they worked fine, without even the need to set up the PS Eye - which is normally needed for PS Move titles to work properly.

Before anyone screams "Witchcraft!" it's important to remember that calibrating a motion controller to mimic the inputs of an analog stick isn't exactly rocket science. That fact that the PS Move wheel can accomplish this task isn't remarkable in and of itself. What is rather unusual, however, is the fact that the motion control option is being opened up in such a way, allowing anyone to use it for any game experience they desire.

Those who were worried that the accessory wouldn't have enough software support to warrant a purchase can now breathe easier, though it's hard to imagine playing anything but a racing title while holding the massive controller.