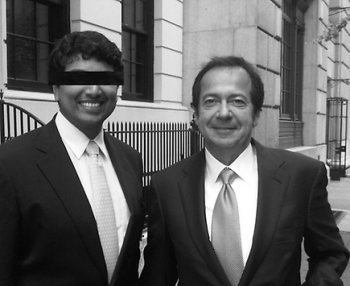 A Twitter user who anonymously posted fake "breaking news" about the devastation being wrought by Hurricane Sandy has had his identity revealed to the world.

It's no great secret that people act like jerks when they think they're safely shrouded in an impenetrable cloak of anonymity. Case in point: Twitter user ComfortablySmug, who posted several alarming tweets last night about the chaotic state of affairs in New York City, including that ConEd would shut down all power to the entire city at 3 am today, that the subway system would be closed for the remainder of the week, that the floor of the New York Stock Exchange was under three feet of water and that the governor of New York was trapped in Manhattan.

All of the above tweets were eventually refuted, but not until they'd been retweeted more than 500 times. The attention naturally led some people to wonder why a person would do such a thing, especially during a time of crisis, and that in turn led to wondering about who would do such a thing. And as we should all know by now, anonymity is tough to maintain when the internet decides that it wants to know who you are.

So it is that ComfortablySmug was unmasked in short order as New York City resident Shashank Tripathi, thanks to censored images he'd posted to the Twitter account that were found unedited elsewhere. Tripathi is a hedge fund analyst, "prolific commenter at NYmag.com" and campaign manager for Christopher Wight, the Republican candidate for U.S. House of Representatives from New York's 12th district. He said in a 2009 interview that he's "not as blatantly an asshole in person" as he appears to be online, but still has "asshole tendencies."

And why did he do it? It's possible that he could have been driven by some warped political partisanship; the tweets suggest a failure of leadership in the face of a massive disaster and at one point he wrote, "Well Wall St is basically destroyed. Obama has accomplished the mission of his first term in office. We cant afford four more. #Mitt2012". Or maybe he really is just a jerk. He's not saying either way; after tweeting regularly and often throughout the worst of the storm, the ComfortablySmug account has been silent since early yesterday afternoon.