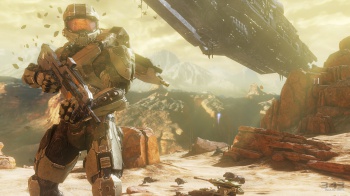 Gamers have invested about $3 billion in Microsoft's flagship series.

If you're a die-hard Halo fan, you've probably racked up six or seven games from Microsoft's sci-fi shooter series by now. If so, you're in good company: Since its launch in 2001, the Halo series has moved 46 million games, resulting in about $3 billion in revenue for Microsoft. With Halo 4 on the immediate horizon, these numbers will probably see a dramatic increase in the next few weeks, so now is the time to establish your Halo hipster credit by claiming you were one of the original 30-40 million "cool kids."

One of the interesting facts about Halo's sales figures is that each game tends to be a steady seller well after initial release. The series has impressive launch figures, to be sure - $125 million for Halo 2, $175 million for Halo 3, and a whopping $200 million for Halo:Reach - but its day-one sales account for only a small portion of its profits. Monetary values aren't the only impressive figures on Microsoft's side, either: Players have spent over 5 billion Halo-hours on Xbox Live amassing over 100 billion kills.

These sales and figures don't even begin to account for the time and money people have spent on Halo books, toys, comics, and obscenely detailed cosplay, so the actual amount of money and mind-share the IP has earned for Microsoft is much, much higher than these numbers suggest. That said, 46 million players and $3 billion dollars? Most developers would be pretty happy with that.