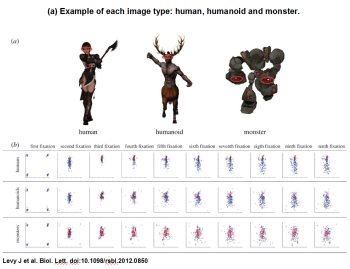 A 12-year-old boy has been credited as the lead author on a Royal Society report that used the Dungeons & Dragons Monster Manual to examine the mechanism behind the human gaze.

The problem facing University of British Columbia psychologist Alan Kingstone, as he pondered the question of why animals follow the gaze of others, is that everybody's eyes are stuck more or less in the middle of their faces. How can you tell whether primates "possess a distinct neural module that is uniquely tuned for the eyes of others," or if they just naturally look at the center of skulls, when there's no way to separate the two?

Enter his son, 12-year-old Julian Levy, who in the way of children didn't see why it was such a big deal. He suggested that since humans all have their eyes in their faces, the obvious solution would be to study non-humans, specifically the creatures of the Dungeons & Dragons Monster Manual. And since it was Levy's idea, Kingstone convinced his teacher to give him time some away from school and then put him to work on the experiment.

Levy had 22 volunteers stare at the corner of a screen, then press a key to bring up one of 36 images from the Monster Manual and let their eyes roam. Recordings of their eye movements made with a special headset camera demonstrated that when volunteers looked at images of humans or humanoid monsters, their eyes moved to the center of the screen and the straight up to the face, but when confronted with images of monsters with "displaced eyes," they stared at the center of the screen and then off in various directions, looking at the eyes "early and frequently, whether they were on the creatures' faces or not."

Kingstone explained that the findings actually have real-world significance because it provides insight into how and when we gain social information from others and may even help to explain why autism sufferers often don't make eye contact during conversations. "If people are just targeting the center of the head, like they target the center of most objects, and getting the eyes for free, that's one thing," he said. "But if they are actually seeking out eyes that's another thing altogether."

Kingston wrote the report "Monsters Are People Too," published in the Royal Society's Biology Letters, in conjunction with post-doctoral student Tom Foulshan of the University of Essex. But because Levy, who's now 14, was the driving force behind the experiment, preparing the images, running the experiment and coding the data, he's cited as the lead author. "Monsters Are People Too" can be read in full at the Royal Society Publishing website.