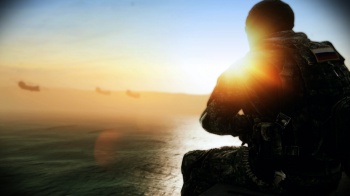 Michael Pachter says that the shooter's poor review scores may be "fatal" to the brand.

Medal of Honor: Warfighter, the second title in the modern reboot of the franchise, released to a lukewarm reception. CEO John Riccitiello recently admitted that upcoming earnings would be "soft" due to low sales expectations of the FPS. Industry analyst Michael Pachter echoed the sentiments, saying that Warfighter's poor performance was a major setback in EA's efforts to take on Activision in the lucrative big budget first-person shooter space, and that we would shouldn't expect to see any more sequels from the franchise.

Pachter, from Wedbush Securities, says that the game's disappointing review scores may have "destroyed" any chance for another sequel to be produced. He believes that EA's delaying of releasing review code in order to minimize negative press had "backfired", resulting in low-scores "piling on" after the initial few critical reviews.

"We think that low review scores will impair EA's (and the Medal of Honor brand's) reputation with those who pre-ordered the game or bought it as soon as it was released (likely some of EA's most dedicated customers), and believe EA alienated at least a small portion of these gamers.

The first game in the series had a decent aggregate of review scores, scoring 75 on Metacritic. Pachter noted that, despite EA's earlier commitment to an improved product with Warfighter, the game only managed to score an average of 50.

Pachter also believes that the game is likely to fall short of its expected earnings by $100 million or more. The game's poor sales performance suggests that EA should not expect to see any strong sales in DLC subscriptions or digital revenue either.