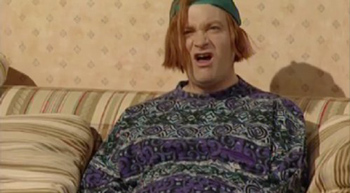 It turns out your kids really do need that iPhone after all.

When I was a young lad, I was convinced my sub-awesome sex life wasn't down to my haughty attitude, poor hygiene or Space Hopper-esque physique. No, I was certain that the reason the ladies weren't flocking to my nether regions like hungry seagulls attacking an abandoned bag of chips was that I didn't have a fancy phone. Now science has proven me right. So thanks for that, mum.

According to research from the University of Southern California, teens with internet-enabled phones are twice as likely to hook up with random strangers for sexual fun times and are more likely to engage in said fun times without proper protection. The study, which claims smartphones open up "a risky avenue," - though I guess that depends on what kind of sites you're visiting - indicates that kids with fancy new phones are 1.5 times more likely to be sexually active than their clunky, Nokia-wielding competitors.

The study was carried out on 1,940 high-school students in Los Angeles last year and was presented at the 140th Annual meeting of the American Public Health Association yesterday. It's worth noting, however, that only a third of the respondents copped to using their cell phone to access the internet. It's also worth noting that teenagers' claims about their sex lives generally only have a passing relationship with the truth. For example: when I was a teen, my proclaimed list of sexual conquests included Courteney Cox, Sarah Michelle Gellar, Catherine the Great and Cheetara from Thundercats.

"We-parents, health educators, physicians-must recognize that cell phones are yet another new way for adolescents to meet sex partners," said Hailey Winetrobe, MPH, CHES, researcher at USC and an APHA Annual Meeting presenter. "Parents and school health professionals should talk to their teens about being safe in meeting people online and in using condoms to prevent sexually transmitted infections and unplanned pregnancies."