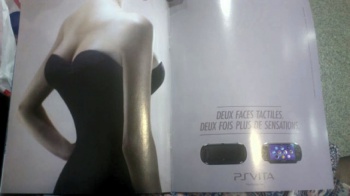 Someone really needs to give Sony the booby prize for weird handheld marketing. Looking to revitalize its flagging Vita sales, the Japanese electronics giant has once again embraced the lovely dual spheres of sex and gaming. A new French vita ad portrays a woman in a sleek black evening gown from the neck down. Sounds simple enough, but the lovely lady in question has an unusual feature - well, two, really. In addition to a generous bust on her chest, this mutant creature sports another pair of sweater kittens on her back, with a caption inviting players to touch both sides for double the fun.

"Two touchable sides," the ad reads (in French, of course), "Two times the sensations." Technically speaking, the ad copy refers to the Vita's dual touchscreens, which, like the chesticles in the advertisement, exist on both the front and back of the device. To the best of my knowledge, there's no actual Vita game that involves grabbing at an unsuspecting woman's double set of double-Ds, but the subtext is clear: Having a Vita is as desirable as having a four-breasted woman. Your mileage may vary on whether that's a sexy thing.

Whether the ad is cute, pandering, or slightly offensive is a matter of personal taste, but one thing to keep in mind is that Sony has no plans to run the ad outside of France, and cultural mores there are very different than in the English-speaking world. That said, the ad seems unlikely to win many new female fans. As for prospective male buyers, the ad may prove effective among the "young-and-starved-for-female-contact" crowd. When real breasts seem constantly out of reach, that Sony Vita may start to look like a pretty damn appealing substitute.