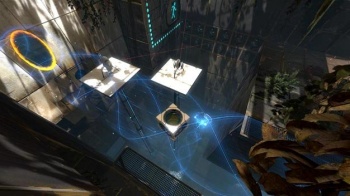 The In Motion DLC pack will make use of Sony's motion controller.

You may recall that when Portal 2 had been out for a few months, you could buy some rather expensive DLC for it. While the In Motion pack was technically free, the Razer Hydra peripheral necessary to play it on a PC cost $140. The days of plunking down the cost of a Wii for Portal 2's most elusive DLC content are finally over, as next week, PSN will acquire the In Motion pack that's compatible with its own Move controller.

Like Opposing Force or Blue Shift for Half-Life before it, In Motion was a product of an outside company instead of Valve. Sixense Studios designed 20 new test chambers for the game and added a few new motion-controlled features, such as rotating and scaling objects. The release of the DLC pack coincides with Portal 2 coming out as a downloadable PSN title, as well as a patch that allows PS3 players to use Move controllers with existing copies of the game. In other words, Portal 2 players on the Xbox 360 will soon be the only ones who have to control Chell's latest adventure with a traditional controller.

In Motion will retail for $9.99 and hit PSN on Tuesday, November 6, 2012 (just in time for Election Day!) in the United States. Unfortunately, there's no word on a European release date yet, but it seems reasonable that In Motion will show up in the Old World sooner rather than later. We hear that portals make getting from place to place much easier than it used to be.