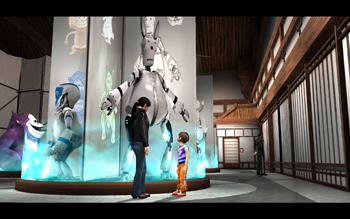 The sequel to Dreamfall: The Longest Journey is in pre-production for a PC and Mac release.

The internet was all aflutter yesterday with news that a long-awaited follow-up to Dreamfall: The Longest Journey was in development. Developer Red Thread Games, founded by The Longest Journey series designer Ragnar Tørnquist, is planning to make Dreamfall Chapters an episodic release, and it's currently in the pre-production phase. Though the announcement was made on The Secret World developer Funcom's website yesterday, Red Thread will be making the Dreamfall Chapters completely independently... with the help of some crowd-funding.

"We will be doing a Kickstarter," Tørnquist said in an interview with Rock Paper Shotgun. "Not right now, but we will be doing it in the near future, simply because although we received a grant from the Norwegian Film Institute... that is only for the pre-production phase... In order to fully develop Dreamfall Chapters we're going to need more money and we will be going to Kickstarter."

Tørnquist added that he has been working on Dreamfall Chapters' story since the previous game ended on a massive cliffhanger in 2006, and already has a basic outline of the game's plot and characters. Though the developer is looking at all of its options for release platforms, right now it's focusing on getting Chapters out on PC and Mac. No dates were given for a Kickstarter campaign or expected release window, and we probably won't hear more for at least a few months. "In a couple of weeks we'll go completely silent and re-emerge early next year with a lot more to show hopefully."

"We intend to be extremely open with production," Tørnquist added. "We don't plan on hiding away and pushing out the occasional screenshot. We want to be completely transparent and open, let people know where we're at." Expect to hear more about Dreamfall Chapters in 2013.