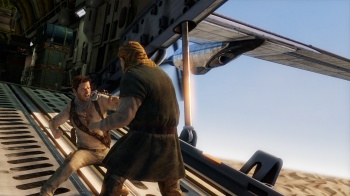 If you're an Uncharted fan, you may have seen the Naughty Dog chart, which implies that all of its series become kart racers by the fourth entry. The Vita prequel Uncharted: Golden Abyss managed to avoid this trend, but the next entry in the series will skew a little closer to "unexpected genre" territory. Uncharted: Fight for Fortune, due out on Vita in the not-too-distant future, will be a casino card game set in the wisecracking world of Nathan Drake.

The game comes courtesy of One Loop Games, an experienced studio that has created both console titles (Full Spectrum Warrior, The Saboteur) and mobile spin-offs (God of War: Betrayal, Ratchet & Clank: Going Mobile). Shuhei Yoshida, president of Sony's Worldwide Studios, retweeted the game's existence last night, although One Loop's website still plays coy about its first "secret project. "When you see it, you're going to love it!" promises the developer. Confirmation of the game's existence and genre came via the Australian and Brazilian ratings boards, which describe the game as suitable for all audiences and place it as a casino game.

Aside from the series, platform, and genre, Uncharted: Fight for Fortune doesn't have many concrete details yet. Given the "high adventure, witty banter" nature of the series, a James Bond-esque scenario that pits Nathan Drake in a high-stakes card game seems reasonable, but the game could just as easily focus on a peripheral character, or even eschew a campaign entirely for an Uncharted-themed, multiplayer-focused experience. Either way, anyone waiting for an Uncharted kart racer will have to hold out just a little longer.