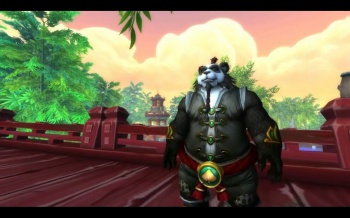 A lot of MMOs are having trouble with the traditional subscription model, but World of Warcraft is not one of them. Blizzard's competition-crushing online RPG peaked at 12 million subscribers, but saw that number drop by about a quarter in recent months. Thanks in large part to the Mists of Pandaria expansion, the game's subscriber base has recovered somewhat and is holding steady - for now - at a respectable 10 million.

A few months ago, two analysts posited that World of Warcraft represents a danger to its parent company, Activision Blizzard. In light of a declining subscriber base, they argued, leaning too heavily on the aging MMO for revenue would not work as a long-term strategy. While a gain of 1 million subscribers in a single quarter is promising, this could simply be an upward bump in a general decline. The real test of Mists of Pandaria's success will be how many players who joined (or rejoined) WoW for the new content stick around in the long-term.

WoW has made some concessions to the free-to-play market, but so far has exhibited no real interest in abandoning its highly successful subscription model. Based on these numbers, it won't have to anytime soon, but WoW is not likely to plateau at 10 million subscribers, one way or another.