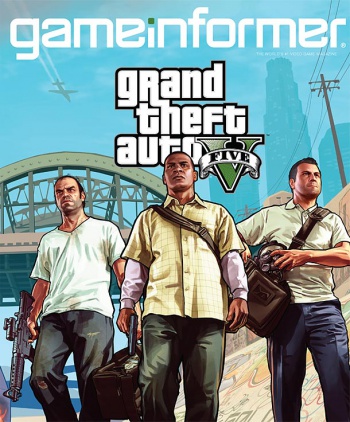 Grand Theft Auto V's main characters have been revealed on the cover of December's Game Informer.

After months with no details, information about the long-awaited Grand Theft Auto V is slowly but surely being released. Last week, Rockstar Games promised that it would be the biggest, most ambitious game in the series so far. The December issue of Game Informer features a Grand Theft Auto V cover story, which shows off the game's protagonists for the first time. Yes, that's protagonists, plural; GTA V will have three main characters.

As confirmed in the trailer released last week, Grand Theft Auto V will take place in Los Santos, which was previously the setting for 2005's Grand Theft Auto: San Andreas. Game Informer hasn't yet stated any other details about the characters, like their names or why they're toting weapons on the streets of Rockstar's version of Los Angeles, but that information will presumably be in its 18-page story. According to the publication, the way these protagonists are used will be "groundbreaking."

Does the presence of three protagonists imply that GTA V will have co-op? Three separate campaigns? GI's 18-page story will have more details, but for now all we can do is speculate. Grand Theft Auto V is due out in the spring of 2013.