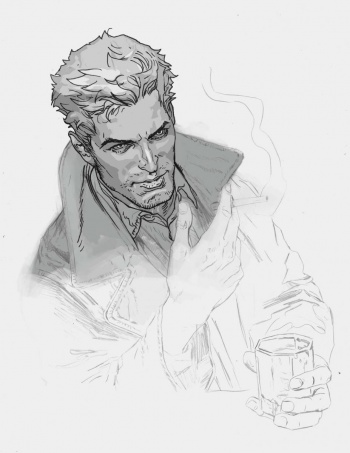 DC Comics will end its long-running Hellblazer series so John Constantine can play with superheroes.

Vertigo Comics, the mature content branch of DC Comics, has had one rare constant in its decades long-existence: John Constantine. Created by Alan Moore during his run on Swamp Thing, the morally questionable, chain-smoking, and unmistakably British magician found a new home in 1988 with his spin-off series Hellblazer. Of course, all good things must come to an end, but purist Constantine fans will likely be furious to discover how; Hellblazer will end in February 2013 with issue #300 so that Constantine can start a new series set in DC's New 52 superhero line.

The new Constantine series will be written by Robert Venditti, creator of The Surrogates, with art by Superman artist Renato Guedes. "Few characters in comics are as complex and entertaining as John Constantine, and I'm finding him to be every bit as enjoyable to write as he is to read," Venditti said. "It's my goal to have the new Constantine series be equal parts familiarity and surprise. This will be the Constantine we all know and love, but facing new and unexpected challenges from both inside and out." The final Hellblazer issue will conclude the storyline "Death and Cigarettes" written by Peter Milligan with artists Giuseppe Camuncoli and Stefano Landini.

Constantine actually started out as a blue-collar magician within DC Comics canon, but that period didn't last for long. Once he branched out into Hellblazer, Constantine's world became recognizably human and contemporary. The character began to age normally, interactions with the DC Universe became rare, and meetings with spandex superheroes were strictly off limits. Constantine has recently made appearances in non-Vertigo books like Search for the Swamp Thing and Justice League Dark, which in hindsight were likely attempts to ease the character into the DCU. It's just odd that DC would end such a critically acclaimed series to bring him back to a superhero's world.

I have a feeling that my opinion will be in the minority on this one, but Constantine's return to the DCU doesn't have to be a bad thing. My favorite interpretation of the character actually came from Neil Gaiman's The Books of Magic, which clearly fixed Constantine in DC lore while playing to his obvious strengths and weaknesses. The problem is that striking such a tenuous balance is a very difficult task even for veteran writers. It remains to be seen whether Constantine's new creators are up to the challenge, especially with the high standard set by previous teams.

Take My Money: Batman v Superman Who Are You Rooting For? TrishaHershberger 20 Comments
Comments on