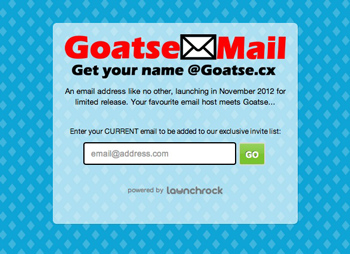 The internet's most notorious shock site will add a little bit of pizazz to your boring email address.

Tired of people opening the emails you send them? An Australian IT consultant has just the thing. The consultant, who wishes to remain anonymous, paid $10,200 for the notorious domain back in 2008. He's now trying to recoup some of that well-spent money by offering @goatse.cx email addresses for $5 a year.

Naturally, web users felt the need to subject their fellow human beings to the image. After it was hosted on goatse.cx, tricking people into visiting the site quickly became an international pastime. In 2004, the government of the Christmas Islands decided it had enough of being associated with the image and booted goatse.cx off the .cx domain. In 2008, our unnamed Australian bought the site from its Canadian owner on a late-night whim.

In honor of Johnson and his unique talent, the owner of the site has reserved the [email protected] email address for his use.

Now, if you'll excuse me, I'm about to link goatse.cx as the source of an article. This is a watershed for me, I'm going to savor it.