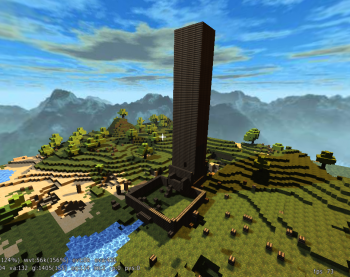 Combined with Xbox 360 sales, that makes for well over 12 million Minecraft copies sold.

Notch tweeted today that Minecraft has passed the eight million mark in sales, making it one of the best selling PC Games of all time. Combined with Xbox 360 sales, now totaling something like four million units, that means Minecraft has sold something like 12 million units - and rising, because that doesn't include the million or so pocket edition sales. It's a hefty sales number for a AAA title on the PC, let alone an indie. Notch seemed excited, letting us know that "My face is making grinning sounds, so I assume it's grinning!"

Meanwhile, Mojang has been working on building a Mod API for Minecraft, to ensure long term expansion of the game. Jens "Jeb" Bergenstein, the lead on the game, told PC Gamer that "everything new I'm thinking of should probably be a mod." Therefore, the brains behind Minecraft are working on making the game more Mod friendly. Entailing what is apparently a huge amount of work and a recoding of Minecraft from the ground up in many places.

Minecraft's sales numbers are staggering, and will likely set the indie bar for years to come. Impressive as they are, though, the numbers are nothing like the sales numbers of AAA titles. It's likely that for the immediate future, Minecraft's success will remain bottled lightning - impossible to replicate, but nonetheless awesome. Providing community support, meanwhile, will likely only sell more copies of the game because of the ridiculously awesome mods.