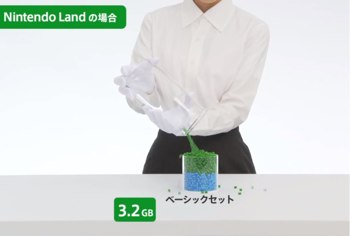 Gather around, kids, Nintendo has some explaining to do.

Virtual storage, especially on a video game console, isn't a terribly complicated concept, but just in case big numbers like 32 are a bit much for you to handle, Nintendo has created an informative video to aid you in selecting the right storage option for your needs. Using colored beads, clear containers, and a faceless model, the demonstration offers a visual touch while also making it clear that if you were planning on picking up the most basic Wii U package available, you're going to probably want an external storage device. The video is entirely in Japanese, so I'll break it down for you.

The base model of the Wii U comes with just 8GB of Flash memory. The premium edition bumps that number up to a much more respectable 32GB. After formatting each drive, the useable space is cut to 7.2GB and 29GB, respectively.

The first time you boot up the Wii U and create things like your personal account, the setup process eats up a whopping 4.2GB of additional space, leaving owners of the basic model with just 3GB of space for things like games and media. That's... not a lot. In fact, as the green colored beads overflowing onto the table in the video show, you won't even be able to install a rather modest title like Nintendo Land, which takes up 3.2GB on its own.

However, both models of the Wii U allow for external storage via USB, and the console supports up to 2TB, should you decide to grab a full-sized hard drive. The video simplifies this by having the nameless gal pour a ton of colored beads - representing games, account data, and other media - into a large plastic tub. Basically, if you didn't already know that 8GB isn't a lot these days, you have no excuse to plead ignorance now.