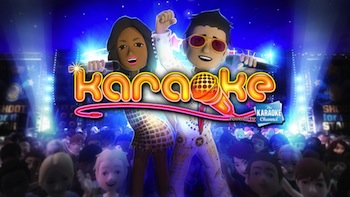 While we usually think of Autumn as the time to seal ourselves into our lairs and play the latest mega-budget game, it's easy to forget about the family gatherings that loom on the calendar. Arriving "in time for the holidays", Microsoft is releasing its official karaoke game. Simply entitled Karaoke, it streams a huge collection of songs on your Xbox, all for an hourly fee.

Instead of purchasing songs outright, players will purchase singing time. However, they can only be purchased in blocks of 2, 6, or 24 hours, using Microsoft Points as usual. There's no announcement on pricing yet.

The Karaoke Channel will be powering the new game, bringing it's massive 8,000 title database with it. Instead of downloading songs, Karaoke will stream them over the internet. Songs can be queued up using the SmartGlass app on a tablet or smartphone. Karaoke will also feature the ability to add the lead vocal track back into the mix, or change the key of the song.

While Karaoke will work with any Xbox compatible microphone, the Kinect doesn't appear to be supported. Additionally, there's no word yet about whether or not an Xbox Live subscription is required to access Karaoke, but it's a safe bet considering Microsoft's insistence that "internet activated" apps sit behind the paywall.

The gaming industry is scrambling for alternative business models these days, and pay-as-you go has certainly been suggested. Instead of shoe-horning the largest money-maker into a product, the pay-as-you-go model seems to make sense for a party game like Karaoke. We'll have to see what the masses think later this year.