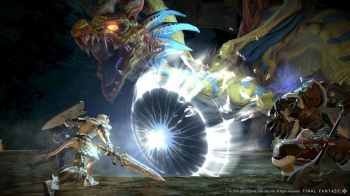 A Realm Reborn will not launch until it is absolutely ready.

Berating Final Fantasy XIV for its disastrous launch is like chewing out Napoleon for his Russian campaign: It's a little late, and it's been done to death. While the game hurt Square Enix in terms of credibility, its financials took a significant hit as well. In fact, the game's director believes that another misstep of Final Fantasy XIV's magnitude could sink the company, which makes the game's imminent relaunch as A Realm Reborn all the more precarious.

One of the reasons why Naoki Yoshida, Final Fantasy XIV's director, is hesitant to set a hard release date for A Realm Reborn is that Square Enix cannot afford - in any sense of the word - another poor launch. "We won't make a mistake like FFXIV again," he says. "[If] we did, it would be like at the level of destroying the company." Even so, coding for A Realm Reborn began with a 16-month timeframe: an accelerated pace, in terms of MMOs. The pace has relaxed somewhat, since Yoshida believes that gamers will appreciate the attention to detail in FFXIV's 2013 relaunch. Launching it before the end of the year, he argues, would result in a product that fans wouldn't enjoy as much.

Until the game launches, it won't be clear exactly how A Realm Reborn differentiates itself from the original Final Fantasy XIV, but according to Yoshida, it will be more grounded in traditional MMO conventions than its predecessor. Much like Final Fantasy XI used EverQuest as a template, Yoshida cites World of Warcraft as a major inspiration for the relaunch, along with titles ranging from Ultima to Diablo to Dark Age of Camelot. "Unless you are a genius, you cannot make something completely new from nothing," he explains.

Knowing the financial stakes, A Realm Reborn's launch is sure to be instructive. Unless it goes well, all of those "Final" Fantasy jokes will suddenly become more relevant than ever.